From Seed to Sold 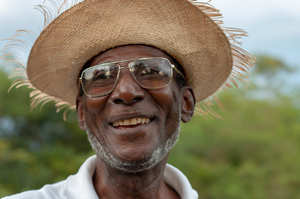 This photo essay explores the agricultural process of growing rice and other products, from planting to the marketplace. MCC partner PDL (Partenariat Developpement Local by its initials in French) works to accompany local farmers in central Haiti.

PDL (Partenariat Developpement Local by its initials in French) was founded by Cantave Jean-Baptiste (pictured) in 2009. The organization’s primary objective is to act as a partner to rural communities in Haiti’s Artibonite, Center, and North departments (provinces), training them in community organization and sustainable agricultural practices as well as other types of social, economic, and environmental work.

Together, PDL and the agricultural cooperatives, or gwoupmans, they support are changing the standard of living in the countryside. As a result of PDL’s projects, these gwoupmans are developing autonomy and resilience as they continue to learn and grow with the help of PDL and the members of their gwoupman. 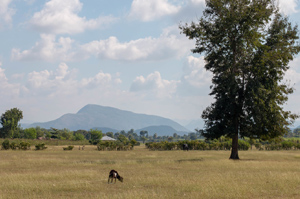 PDL works with farmers in the Artibonite, Center and North departments of Haiti who are growing food to be processed and sold in local markets. In this area, with PDL’s help, farmers have formed cooperatives to sell this produce.

While the majority of the damage after 2016’s Hurricane Matthew occurred in the South, Artibonite, and Northwest regions, the North also experienced sustained rains for over two weeks. This resulted in a 95% loss of their bean crops in the affected areas, meaning many farmers sustained significant personal losses after the storm ravaged the land. 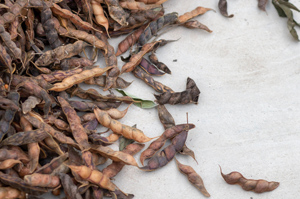 The black beans pictured are being dried on a flat platform for several days until they are ready to be stored. They can stay in storage for several months until an order is placed to purchase them. The gwoupman’s then sell these beans at markets, and to schools.

One of the results of MCC’s partnership with PDL is that PDL is now providing locally sourced foods to MCC-supported schools that provide a hot meal—including beans like these—every day to their students, who are some of Port-au-Prince’s most vulnerable. This relationship benefits both parties: it provides economic stability to the farmers and a nutritious meal to the schoolchildren. 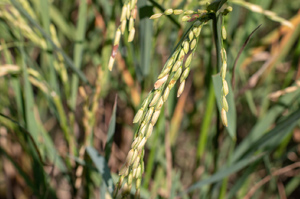 How rice goes from field to market

Several months after planting, the grains of rice are ready to be harvested.

One of the most important crops the gwoupmans plant is rice. Rice is a staple food for most Haitians and, for some people, will be the only meal in a day.

Rice can be the most important meal of the day, Haitian’s eat rice in different ways: plain white rice, rice mixed with beans, and a kind of fermented rice called diri national are all popular in Haiti. 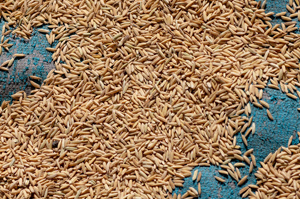 After the rice is harvested it is set out to dry. While beans are placed on a flat surface to dry, rice is placed on sheets on the road. This is so they are closer to the grinding mill after they finish drying. The process takes about five hours.

Drying the rice is an important step in the process from seed to sold, and can be affected by a number of factors. One of them is humidity. The micro-climate in this area is cool and wet, with less sunshine than elsewhere, which is not as ideal for drying. If rice is stored before it is fully dried it can spoil, resulting in significant crop losses. Other factors that can lead to crop loss are insects and pests. 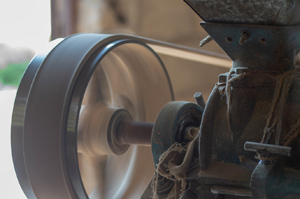 After the rice is dried it is taken to a grinding mill. At this point of the process the rice enters through the top part of the mill and the grain is removed from the hard outer shell. It also removes most rocks from the grains. This machine can produce two full bags of milled rice in an hour. 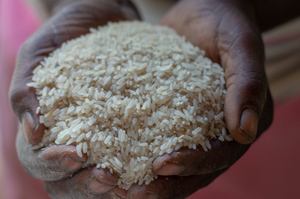 Now the rice is ready to be bagged, sealed, and sold at the market.

PDL’s work is increasing food security in the areas where it works– almost 7000 people have greater access to food for longer periods of time.

According to the World Food Program, nearly 50% of Haiti’s population is malnourished and 22% of children have stunted growth due to chronic malnutrition. This situation is even especially serious among the country’s most vulnerable children and young people: not only in rural areas, but in urban centers. These street children and children involved in the restavek system of domestic servitude, who are among those served by the MCC-supported schools that receive local food from PDL. 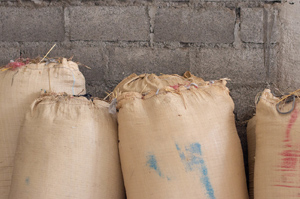 These large sacks of rice are ready to be transported to the packaging site to be properly bagged, sealed, and sent to market. These storage bags help keep pests and rodents out of the rice. Rice needs to be carefully stored and monitored during every step of its journey from the field to the market. Insects can eat rice and seeds while they’re being stored in preparation for the next planting season; one of the major losses farmers experience is losing seeds and needing to buy them again for the next season.

Even once the rice is processed, bagged, and ready to be sold, there’s still the potential for dampness or rodents to get in. 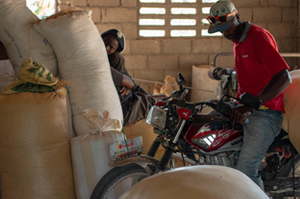 Sacks of rice are loaded onto a motorcycle to be transported to market . The dirt roads are bumpy and driving on them can be a challenging experience. The wet season creates puddles, and canals of streaming water can cause significant damage to the roads. In the dry season, the roads are smoother but dustier. Drivers also have to watch out for stray livestock, like goats, pigs, and chickens. All of this means getting the rice from the grinding mill to the market can sometimes take much longer than expected. 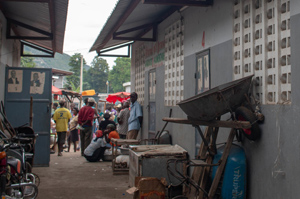 After a long journey from the soil, the rice is ready to be sold. Behind door number 6 lives the kiosk where members of a PDL-supported gwoupman will sell their different kinds of rice and beans.

Five gwoupmans are currently working with PDL. These gwoupmans represent over 6,000 farm families that are benefiting from greater access to markets for their produce and better pricing for this produce, as well as being connected to contacts in the Port-au-Prince region. 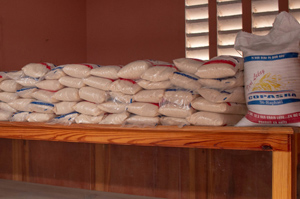 This kiosk in a market in St. Raphael is not the only place the rice will be sold. Many of the products are sold directly to customers, such as local restaurants or the MCC-supported schools in Port-au-Prince. In 2017, a pound of rice grown by the farming cooperatives supported by PDL sold for 65 cents US.

Once these sacks are purchased, this rice will have completed its full journey from seed to sold!