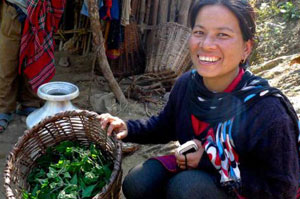 Available year-round, stinging nettle grown near homes or gathered in the jungle is a good source of calcium and other nutrients. MCC partners such as Shanti Nepal community health worker Bishnu Maya Chepang encourage people to eat nutrient-dense, locally available nutritious food such as nettle, which is served as a sauce with cornmeal or millet.

This reflection was written by Leah Reesor-Keller, one of MCC Nepal’s country representatives, before the April 25th earthquake. Before the quake, one part of MCC’s work in Nepal was promoting local, nutritious food. We will be supporting some of these same partners in our earthquake relief.

When you talk about food in Nepal, there’s no escaping good ol’ D.B.T. – Dal Bhat Tarkari, or lentil soup, rice and curried vegetables.

The majority of Nepalis eat it morning and evening. When my husband Luke and I lived with our host family in Pokhara, we had two meals of dal bhat a day for four months.

In 2013, I wrote on our blog that if you’re going to eat the same thing every day, dal bhat’s a pretty good choice – healthy, balanced and really filling.

I grew up on a fruit and vegetable farm north of Toronto. My family still owns a farm market and a small grocery store that features locally produced food. I know the value (as well as the tastiness!) of eating fresh, local food and supporting the farmers who grow it.

I came to Nepal ready to immerse myself in local Nepali food. And what could be more Nepali than dal bhat?

But over time, working in MCC’s food security projects across remote regions of Nepal, I began to realize something that had seemed impossible at first.

As treasured as dal bhat may be, it is not the local, traditional food – or best nutritional choice – in all the communities where MCC works.

The first time I visited a Chepang ethnic group community in the remote hills of Dhading District in central Nepal, I had to go out of my way to avoid brushing against stinging nettle plants that lined the steep pathways, even near houses. Why, I wondered, did people let this vicious bush grow all over the place?

I later learned that stewed stinging nettle leaves served over cornmeal or finger millet porridge are traditional staples in the local diet of Chepang people. From a nutritional standpoint, nettle has more calcium than a glass of milk, and millet is a fiber and mineral rich in whole grain.

Yet during that trip, almost every meal I ate consisted of white rice, thin lentil soup and curried potatoes. We were staying with school teachers who had temporarily moved to the community to teach at the local primary school. The teachers were financially better off than most of the other residents, and had come to the hilly community from larger towns to work at the school. They had big bags of white rice and lentils carried up from the town below, and ate a diet that consisted mainly of starch.

In contrast, the local Chepang residents ate mainly whole grains like corn and millet that they had grown themselves, supplemented by wild-gathered food like nettles. The teachers weren’t interested in eating nettle or millet. They saw it as a low status food and chose to eat imported rice instead.

Malnutrition, especially among children under the age of five, is a big problem in Chepang communities. In our partner Shanti Nepal’s 2014 baseline survey of the area, they found that 37 per cent of children were malnourished.

Many simply don’t get enough food to eat because of poverty, and the difficulty of growing adequate food in steep, unirrigated fields. Families report that their homegrown supply of millet or other grains lasts only three to six months, after which men migrate to other parts of country to earn cash for food. In these lean months, families reduce meals and meal sizes.

Consumption of meat and dairy is very rare, often just a couple times a year. In lean times, gathering wild foods like nettles, or other plants from the forest is used as a coping strategy to supplement meals. Remarkably, it is this foraged “hungry-time food,” like nettles, that is often the most dense in vitamins and nutrients.

To address malnutrition, hunger and poverty, MCC Nepal, through its partners, works with marginalized farmers to grow more food and earn more income to buy food.

But equally important is nutrition education, and any effort to reduce malnutrition in this area has to start from a base of valuing the existing food resources. Dal bhat doesn’t make sense in this area – lentils and rice are not native here, and are not the traditionally eaten foods. Instead, a balanced meal might be millet porridge, and stewed nettles with soybeans, or another kind of legume that grows well at higher altitudes.

As MCC partner Shanti Nepal works with Chepang mothers' groups and community development groups in Dhading to promote better agriculture and more food production, they underscore the value of the locally available foods people are already eating, like nettles, and warn people to be wary of nutrition and vitamin claims on packaged, processed foods like instant noodles.

These lessons are part of Shanti Nepal's nutrition counselling for parents who bring their children under the age of five for monthly checks on their weight and growth and in the cooking demonstrations that another partner, RICOD, holds as part of a mother and child nutrition project. Partner Sansthagat Bikas Sanjal integrates short nutrition lessons into the monthly meetings of peer-support groups for people living with HIV and AIDS.

These are just some of the ways that our partners are working to teach the value of local foods.

As I continue to travel across Nepal, visiting just a few of the more than 100 different ethnic, linguistic and cultural groups, I have come to relish the local flair that meals take on in each area.

I try to make a point of asking to eat nettles when in Dhading, or requesting popcorn and roasted soybeans as a snack instead of packaged cookies or instant noodles.

I’ve also come to relish wild foods for the special tastes and the dense micro-nutrients they bring.

I buy fiddleheads when my corner vegetable store in Kathmandu has them and use them in stir fries. I put nasturtium flower blossoms in salads when I can find them, and I look forward to May when yellow Himalayan raspberries line village trails.

I still like a good dal bhat tarkari. To be honest, now I like my dal and tarkari with millet porridge instead of rice. But they’re both tasty.

Leah Reesor-Keller has been living in Nepal since 2012. She first worked with MCC's food security projects. She and her husband, Luke, have served as MCC representatives for Nepal since 2014.

MCC Photo by Leah Reesor-Keller - Available year-round, stinging nettle grown near homes or gathered in the jungle is a good source of calcium and other nutrients. MCC partners such as Shanti Nepal community health worker Bishnu Maya Chepang encourage people to eat nutrient-dense, locally available nutritious food such as nettle, which is served as a sauce with cornmeal or millet.